What are Smart Contracts?

Smart Contracts and How They Work

Smart contracts are computer protocols that allow for the digital verification, control, and execution of contracts. Smart contracts are built on blockchain technology, which processes all of the transactions in a contract, eliminating the need for middlemen.

Smart contracts, like regular contracts, specify rules and penalties around an agreement and enforce those responsibilities automatically. Many smart contracts can be used simultaneously, even though they can function individually.

Objects are the essential components of a smart contract. The signatories, who are the parties participating in smart contracts who employ digital signatures to accept or reject the contractual terms; the topic of agreement or contract; and the exact terms are the three main items in a smart contract. 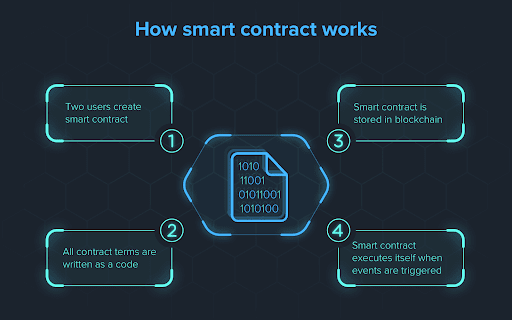 Smart contracts are tamper-proof blockchain programs with the logic “if/when x event occurs, then perform y action.” To enable an interconnected collection of operations, one smart contract can contain many distinct conditions, and one application can have several separate smart contracts. There are several smart contract programming languages, the most prominent of which is Ethereum’s Solidity.

Any developer may construct a smart contract and publish it on a public blockchain for their reasons, such as a personal yield aggregator that moves their cash to the highest-earning application automatically. Many smart contracts, on the other hand, include many independent parties who may or may not know and trust one another. The smart contract specifies how users may engage with it, including who can interact with it, when they can interact with it, and which inputs lead to which outputs. As a result, multi-party digital agreements move from their current probabilistic form, in which they are likely to run as requested, to a new deterministic state, in which they are guaranteed to execute as code. 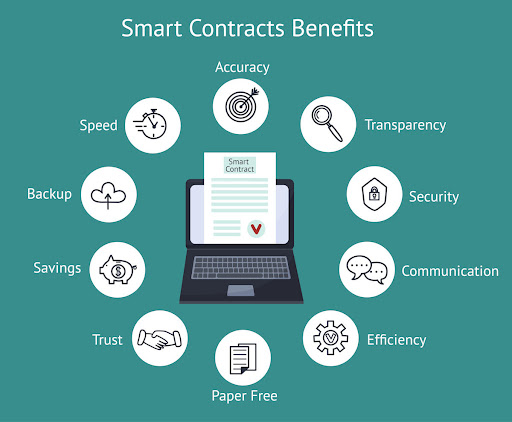 Most typical digital agreements include two parties who do not know one other, posing the danger that one of them would not follow through on their promises. To address counterparty risk, digital contracts are frequently hosted and executed by bigger, centralized entities, such as banks, who can enforce the contract’s provisions. These digital contracts might be directly between a user and a large firm or between two users and a large company acting as a trusted middleman. While this dynamic permits many contracts to exist that would not exist otherwise, it also creates a scenario in which bigger, centralized organizations have an unbalanced impact on contracts.

Security: Using decentralized blockchain technology means there is no single point of failure to attack, no centralized middleman to bribe, and no way for either party or a central admin to interfere with the conclusion.

Reliability: Strong tamper-proof, uptime, and accuracy assurances that the contract will execute on time and according to its conditions are provided by having the contract logic redundantly executed and checked by a decentralized network of nodes.

Equitable: By utilizing a decentralized network to host and enforce the terms of the agreement, a for-profit middleman’s potential to rent-seek and siphon off value is reduced.

Efficiency: By automating the agreement’s backend processes—escrow, maintenance, execution, and/or settlement—neither party must wait for human data to be submitted, the counterparty to fulfill their commitments, or a middleman to complete the transaction.

One of the smart contracts’ intrinsic drawbacks is that the blockchains on which they run are isolated networks, which means they have no built-in connectivity to the outside world. Smart contracts cannot interface with other systems to validate the existence of real-world events or utilize cost-effective computational resources without an external connection. Smart contracts, like computers without Internet access, are severely restricted without real-world connectivity. They can’t know the price of an asset before completing a deal, examine the average monthly rainfall before paying out a crop insurance claim, or verify that products have arrived before settling with a supplier, for example.

Token smart contracts are used on blockchain networks to generate, track, and grant ownership rights to specific digital tokens. The token contract embeds functionality into the tokens it issues, giving holders access to features such as utility/insurance in a dApp (utility token), voting weight in a protocol (governance token), equity in a company (security token), ownership claim to a unique real-world or digital asset (non-fungible token), and more. The FIL token, for example, is used to pay for Filecoin’s decentralized storage services, while the COMP token allows users to participate in Compound protocol governance.

Decentralized finance (DeFi) applications use smart contracts to recreate conventional financial services and products such as money markets, options, stablecoins, exchanges, and asset management, as well as combine multiple services to create new financial primitives through permissionless composability. The smart contract may escrow user cash and distribute them to users depending on predetermined circumstances. BarnBridge, for example, employs smart contracts to automate trades for customers who desire fixed asset exposure to a price pair (e.g., 45 percent token A, 55 percent token B), whereas Aave uses smart contracts to simplify lending and borrowing in a permissionless and decentralized way.

Smart contracts are used in blockchain-based games to provide tamper-proof execution of in-game operations. PoolTogether, a no-loss savings game in which players stake their monies in a communal pool, which is subsequently channeled into a money market where it generates interest, is one example. The game concludes after a certain time period, and a winner is chosen at random to get all of the collected interest, while everyone else can withdraw their original payment. Similarly, limited-edition NFTs can utilize fair distribution techniques, and RPGs can use randomization to provide unpredictable loot drops, ensuring that all players have a fair chance of obtaining rare digital goods.

A parametric insurance policy is one in which the payoff is directly linked to a preset event. Smart contracts provide a secure foundation for constructing parametric insurance contracts that are triggered based on data inputs. Crop insurance, for example, may be constructed using smart contracts, in which a customer obtains a policy based on precise meteorological data, such as seasonal rainfall in a geographic region. The smart contract will automatically provide a payout after the policy if the quantity of rainfall in the given place exceeds the initial declared amount. Not only can end-users obtain timely reimbursements with lower overhead, but the supply side of insurance may also be made available to the public via smart contracts.
Disclaimer: This blog has opinionated information which does not make us liable for anything.