Angular vs React: What to Pick for Best Mobile App Development

Angular vs React: What to Pick for Best Mobile App Development

The trend of mobile app development has picked significant relevance in recent years with multiple platforms emerging with considerable potency. Although the market is filled with numerous viable choices, Angular vs React still appear as the most relied upon frameworks.

Several factors play a role in making them the best front end development frameworks, but you cannot integrate both of them subsequently. That is why the age-old question of React vs Angular, what is better arises.

Before delving into the extensive details, you should first get some standard knowledge on the subject. The given chart will help you assess their basic qualities:

While ReactJS is one of the best open-source libraries on the web, Angular leads the open-source frontend development market. Both carry the imprint of prestigious ventures with the former being developed by Facebook, whereas the latter developed by Google.

Both frameworks have garnered an unmatched stature on the web as numerous reputed firms utilize them. However, it still does not answer the question, which is better. So let us dive into more details about both of them: 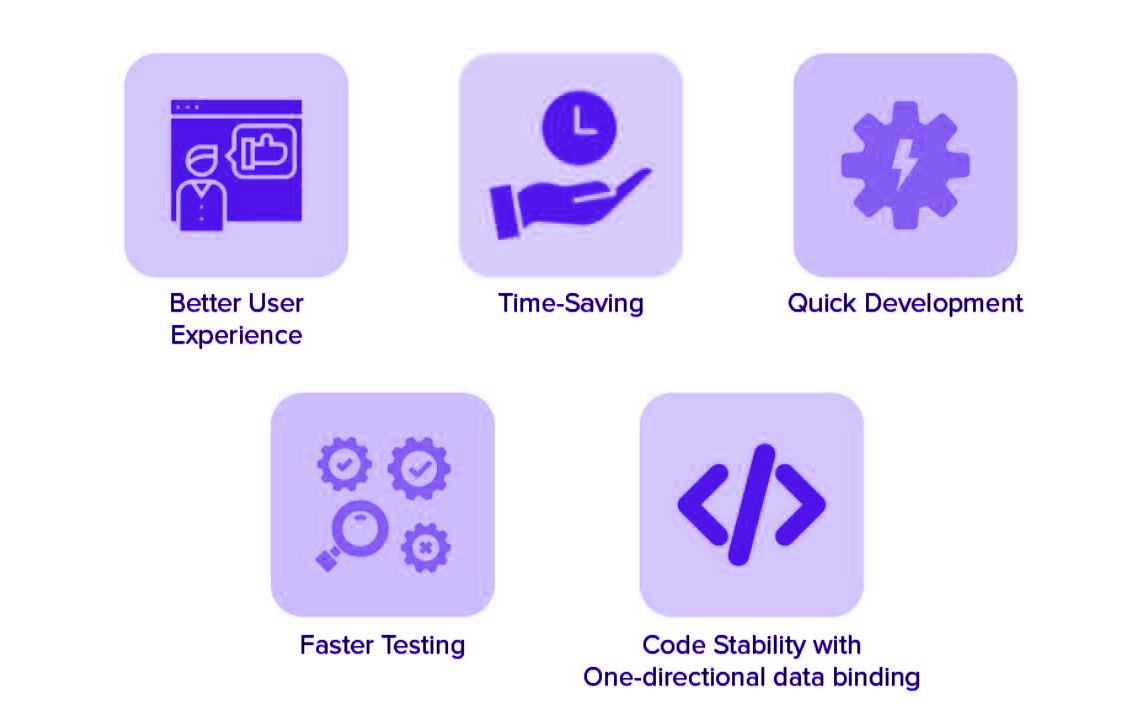 With the utilization of a Virtual DOM, React helps the developers to make any modifications without interrupting other app interfaces easily. This helps establish a dynamic UI alongside a scalable user experience.

As React facilitates the reuse of codes at different levels, a distinction is established in the infrastructure. This results in easy handling of the apps, eventually leading to a time-saving app development process.

React allows you to reuse any existing codes to speed up your development process. Using tried and tested codes facilitates speed while also keeping the efficiency maximum.

The use of Redux throughout React cuts down the hassles of managing and storing large applications. So the developers are free to add apps within one object while empowering other apps’ states.

React lets developers directly interact with every component and instil data binding downwards for the assurance of the parent component’s stability. This increases stabilization and facilitates future development, as well. 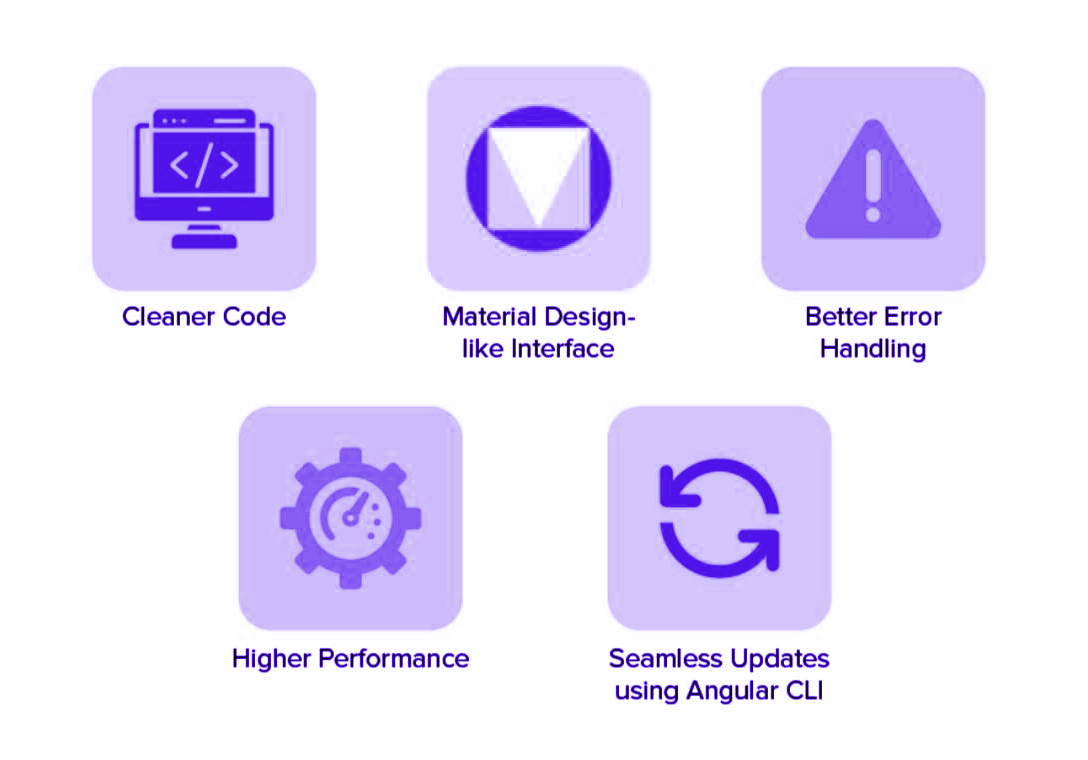 As Angular utilizes TypeScript language, it easily integrates JavaScript while simplifying the threat detection and elimination process. With this, developers can prepare bug-free and clean codes, ensuring premium quality.

With a classified injection of dependency, Angular performs more efficiently than standard AngularJS. This results in higher productivity from every app delivered through Angular.

In Angular, you can get built-in material designs ranging from pop-ups, controls, data tables, and layouts. With this, you get the benefit of designing more of a digital product helpful in the future.

As Angular gets updated, its error fixing properties enhance as well. This helps the framework to identify and eradicate any error occurring in the process quickly.

Angular Command Line Interface (CLI) is simple-to-use and install, newbie-friendly proposes innovation while keeping everything simple and compatible. All these qualities allow developers to implement updates without having to depend on any third-party.

Angular vs React: Which is a better Frontend Development Framework

AngularJS is based on an intricately articulated structure mainly consisting of three layers named, Controller, View, and Model. This allows developers to divide the codes into distinct files facilitating reusability of templates and components for the app’s different aspects.

React utilizes a simpler approach with its functional programming, where the definition of components is more declarative.

As the React codes are easily readable and structured logically, they don’t require developers to build codes specifically.

States are used at several stages in an app development process. Components explain the app’s UI at every point, and when there is a data change, the UI components are re-rendered. The process ensures that the app data has been updated.

With Redux, React stands out as the winner here as Angular does not possess such technology.

On the other hand, Angular utilizes JavaScript or TypeScript. As these are more compact, they help Angular wins this round.

Every template and logic within React is explained while templates in Angular are complex. This quality makes understanding Angular difficult for a newbie, so React takes this round.

However, Angular is compatible to be tested via one tool, allowing the framework to win this round.

Both the platforms have an unmatched reputation on the web, with Facebook and Google claiming to garner more popularity. However, there is no concrete evidence to establish which one is more popular, so the round is a tie.

Both React and Angular possess architectures bases on components, meaning they are reusable, modular, and cohesive. However, Angular utilizes TypeScipt development approach, which wins the round for Angular.

Angular’s learning curve is steeper than React, offering several fixes to one problem with its sophisticated management structure. As its database is constantly updating, you need to keep up with numerous things at once.

Contrarily, React’s learning curve is simpler and newbie-friendly. With the framework facilitating simplicity, it becomes the primary choice for developers.

As Angular possesses CLI, it is able to provide improved development experience. React third-party libraries majorly hinder’s development speed. Due to this, Angular wins the round with relative ease.

With React, you can choose your library, architecture, and tools for creating the app. Angular has a relatively restricted flexibility, stopping the framework from winning this round.

Angular utilizes Real DOM to get updates whenever a section is altered even a bit. On the other hand, React utilizes Virtual DOM that allows making modifications without altering any other section.

As Virtual excels in speed than Real, the round is won by React.

React makes use of one-way binding while Angular’s approach is two-way. Angular might appear simpler on the surface, but it is React that is more refined. Therefore, React takes this round as well.

Both the frameworks possess best-in-class elements and features, with both standing their guard firmly. Since both of them trade equally, the round is deemed a tie.

Angular proposes an Ionic framework along with an efficient UI and Cordova container. React’s library is native, making it compatible with codes in Kotlin, Java, and Objective C.

The testing of Angular can be done via one tool, but the case differs when it comes to React, which requires multiple tools. As the testing time is higher in React, Angular wins the round.

Once again, Angular’s CLI approach makes it easier to implement new updates. Although React’s approach is somewhat similar, it relies substantially on third-party’s libraries. Therefore, albeit both of them possess an akin approach, Angular wins the round.

The concurring development process in Angular slows down its documentation process. This changes with React, as despite its regular updates, its previous insights still stay relevant.

React’s community support is much wider on GitLab and GitHub. However, the developers working on the platform are close. Therefore, the round ends up being a tie. 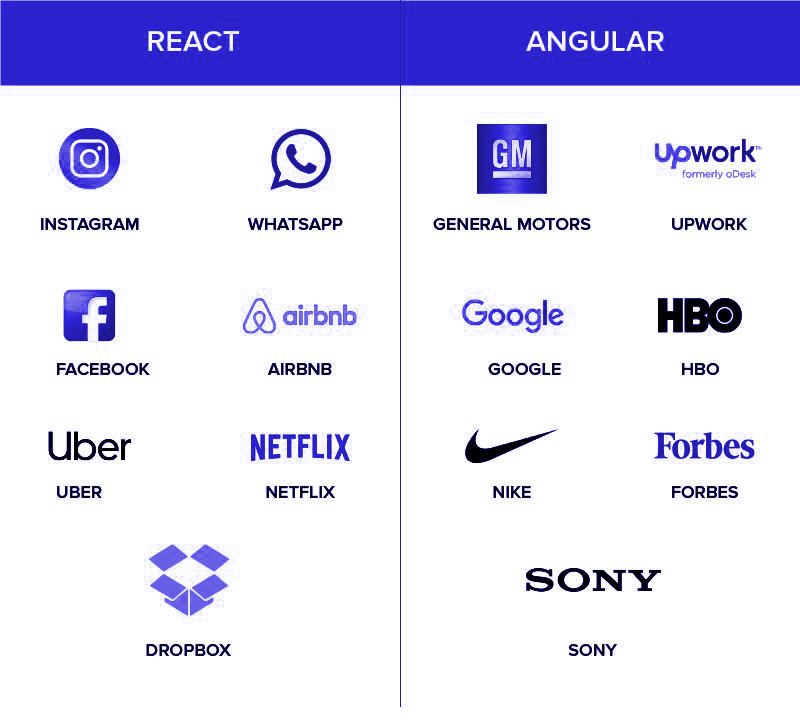 Now that you have basic insight on the platforms alongside a base for comparison, it would become easy for you to choose between them. We have simplified the process more with our analysis, deeming that React should be used when:

On the other hand, you should choose Angular when:

Now, simply go through the points and decide which platform suits your need better.

Being a Project Manager, my areas of interest are Blockchain Technology, Digital Marketing, Growth Hacking, and Fintech Consulting. I love creativity and enjoy experimenting with various techniques in both print and web. I am a creatively inclined individual with a flair for writing. Reading is my obsession. Currently i am focused on creating actionable content for a emerging technologies.

6 Important things to keep in mind before hiring a .NET development company